Archive for the Events Category 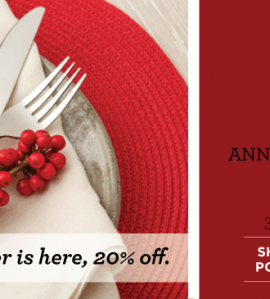 It’s my favorite time of year again! Visit the Bungalow Pottery Studio for the kick off of my Annual sale, receive 20% off prices online* and on-site. See one-of-a-kind pieces (not online) and potter’s specials prized to move.

View the event here and signup on the Bungalow Potter facebook event page.

OPEN STUDIO
While you visit, feel free to check out the basement studio, and see where Bungalow Potter pieces born and go through their complete handcrafted process.

STAY FOR WINE + TREATS
There”ll be wine and treats throughout the day as well, so stay and mingle a little while you shop.

This year, you can get first dibs on some incredible gifts by subscribing to the newsletter. Go online and do it now. Names must appear on the list by Thursday noon. To subscribe go to BungalowPotter.com and click halfway down on the picture and enter to sign up for the newsletter.

____________________
* Please note only items listed in-stock are available for pickup. 20% also applies to custom order pieces, but cannot be made before Christmas. No guaranteed delivery for Christmas. Discount does not apply to shipping, appliances or third-party products). 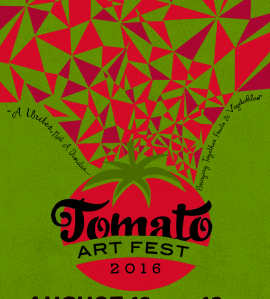 Bungalow Potter to be at the 13th Annual Tomato Art Fest

Bungalow Potter is going to be a featured vendor at the 13th Annual Tomato Art Festival this August, 2016. Come by and see my select dinnerware lines, tile, customer orders, and takeaway pieces. Also, I’ll have select tomato-themed pieces, only available at the festival (can only buy in person, not online!). For more info, please check tomatoartfest.com. I will share and post the location of my tent as well as future coupons that can be redeemed in person.

Last year, an estimated 60,000 came to celebrate this beloved fruit/vegetable and enjoy the day’s festivities. 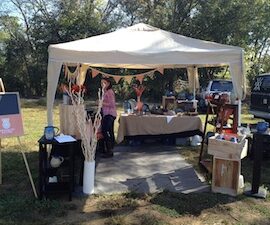 This Saturday marked a historic, memorable day in my journey.

It was my first fair.

Bungalow Potter participated in its first event having a booth at the Handmade Harvest Vintage Farm Fair this year. With a modest $60 entry fee, this event was located just past Gallatin, in the quaint little town of Bethpage, TN. I found out about the event via facebook, and had a friend that lived nearby.

The week of was a wild ride. Monday was the last day to throw, with my friend Amanda making one-pound balls of clay to help the process out. My idea? Throw, like, 30 mugs?–yeah, I made 7. They did not come out as fast as I had anticipated, but had an incredibly large load to fire. With the new addition of place settings, platters, and test tiles, I had to add a ring and use the bisque kiln lid to accommodate the load. I started late tuesday, and was done by the morning time on Wednesday. Wednesday night my roommate helped clean the kiln dust off, wax the bottoms, and we glazed all night. He cut out around 12, and I went until 3. The kiln started at 4am, and at 7, while I slept, he closed the lid. I went into work at 10, just having turned up the kiln to HIGH. 10pm that evening, the pots were still too hot. They had to wait until Friday morning to get wrapped up, along with the other pieces. This drove me a little crazy. I wasn’t cutting it close, but they couldn’t have cooled fast enough for me. I slapped two fans on the kiln and propped the lid. These babies needed to get cool, ASAP.

Thursday night was a dry run in the back yard. I had run to Hobby Lobby for some orange flowers, Jo-Ann’s for some burlap, and Panda Express, well, for some orange chicken. Nothing would stop me now. Except, perhaps the showing of Casablanca at the Nashville Symphony. Yeah, that was at 7pm–and I still hand’t packed up yet. the dry run was still outside, stuff all over. It was a necessary feat to figure out layout, despite having done some recon at TACA a few weeks before. I had found a few tents / displays that I liked, but conceptually none that were “me”-which was ok, I’d have no problem with slapping on the stæven magic to it.

Friday was here, the car not packed yet, and I had to go to work. As usual, I drove the scooter. Downtown and back, cutting out early around noon. My friend Amanda came over, and quickly we packed the tables up, wrapped pottery in the unprinted newsprint ($3 for an end roll from the Tennessean, mind you)–and gathered all the stuff together. The preview was from 2-5, and I was not going to make it any time soon for the 1 hour setup before 2, and my own personal deadline.

Things were packed. A quick stop to the bank, and then to BusyBee Printing in Hendersonville for my signage, I was ready to go. Off to Bethpage, TN.

I finally could relax a little. Then I got a work call. The work call made the trip fly by, talking about branding, media buys, endorsement structure, and blah blah blah–and almost missed my turn. I was finally there, ready to turn in to my spot.

I tracked down the contact-in-charge, and at 4:45pm, was ready to setup. A quick call to my friend who lived nearby (for fun and help) and the timer was set. Total setup was almost 2hours. Between jujishing the pieces and styling them, it quickly became 7pm, and they were ready to lock the gate on us. Luckily, we had some music playing so they knew we were still there. Off Rachel and I went to the Greyfeather Grill in Gallatin for some dinner, wonderful conversation, and some late night strolls around Gallatin Square.

Morning came earlier than usual. I forget to eat breakfast, and forgot my lunchbox (filled with frozen coke cans) for the day. I called my helper, Amanda, and we chatted the majority of the way. Initially about “the shpeal”–the initial connection words we’d make with folks, offering them a brief understanding of the tent, “one-of-a-kinda pieces on your left and right, and our custom pieces in the back–pick your piece, your size, and then your favorite glaze–10% off bakeware, and 20% off 4 pieces or more.”

I’d not had time to put out the pricetags, which I had printed out that morning. I found the key to the cashbox, thrown the email lists inside, and everything needing a bit of fussing. 9am was here.

The first patron came in. I think I pounced on them. “Hello, welcome to Bungalow Potter… ::shpeal, shpeal, shpeal::, ::deep breathe::, ::more shpeal, shpeal, shpeal::
While I didn’t scare them off, necessarily, I definitely was discovering I needed to connect quickly, then share the message, adding “come on in,” and “rest your feet on our rubber mat, (lol)”–that one got attention. Most folks kept picking up the decorative twigs and sticks.

As the day went on traffic increased, our verbage truncated, and more quickly did I discover that you can’t sell ice to eskimos. There were the folks who wouldn’t come in, but man, did they sign up for email, essentially saying, “yes, I’m interested, but you’ll have to woo me.”

Then there were the enthusiasts. “Your work is so beautiful!” and “This is some of the best work I’ve seen,” which would launch into a long story about how they lived in Florida and had the best shows down there…::deep breaths::, ::shpeal shpeal shpeal:: ::come up for air::, –oh look a new customer–”please look around, I’ll be right back!”

Shwew. Just kidding, but not really.

Then there were the folks that saw the most value in what I did. They asked questions, wanted to customize pieces, and picked out glazes that they liked, and made purchases. hurray! My first purchase! Two cannisters (one medium, one large), a plate, and baker. I perhaps didn’t think about the 20% discount through very well. I hadn’t thought through the Square experience, and the app was getting its first use. Keeping things in sync with online was burdensome, and I hadn’t explored it enough. Luckily, the patron was patient and we went over it twice to assure it was correct–for her sake and mine. Tootle-loo! “Thanks for your business, I look forward to making your custom Bungaloware™ for your home!”

I forgot to add shipping. I hadn’t thought through the 20% discount and done the math. The $243 order was now $179. And soon my first order was feeling bittersweet. Moving on…

The rest of the day was oohs and ahhs, but no sales. Between the BBQ truck and the exhaust from the generators, we were getting high off fumes, and needed a break. So, off I went for a stroll. Met some great new friends, and saw some upcycled junk, kitschy handmade things for the country-chic connoisseur, and made my way back.

I had a few requests for lessons, and two couples inquire about getting some custom pieces done–and not just smoke in my hat, but seriously asking. I had their emails. With two potential orders for $300 each, it looked like we were going to make the sales, but just not today. They asked for me to follow up if I didn’t hear, so at this point, it was anyone’s game.

The day was wrapping up, and boy was I tired. Not just from the night before, but the whole week. It felt like a new recipe–ever get one of those? Its a tasty dish, you want to make it, but you get the recipe for the first time and its oh, so difficult. Then you make it, and you’re thinking, “seriously? that’s all it was? I stressed out way to much.”  Well, I was somewhere in between that. It was a lot of work of getting things ready for the first time, but from the feedback I got, everyone felt like I was a pro.

The biggest component for me, is the extension of the concept–what’s the experience I want to create? Being a craftsman-inspired potter, Its hard to translate the bungalow into a tent. But, I could bring some rustic elements, let the products speak, and style them in a way that provided visual interest, affirmation of the brand and create an overall branded experience. I think I nailed that part.

Tear down was underway, and it seemed stuff didn’t fit exactly the way I wanted back in. So, a tote in the roomate’s car, one in Amanda’s, and we were fine.

Doing the math, I broke even. If the two orders come in, as promised, I’ll have made out ok, but $300 in sales isn’t worth returning. In evaluating a craft show, I think that the traffic, juried entry, location, and other vendors involved are important. Also, the  size and location of your booth. Lastly, the overall reputation of the show too. I discovered that a.) Older women b.) artsy couples and c.) financially well-to-do folks who aren’t concerned with prices (ever) are the ones who best like my work. Art enthusiasts are nice, but they have to WANT your piece, and aren’t worried about having too many pieces.

While I didn’t make a killing, it was a positive first experience. I learned what I needed to do to successfully do a show, and even was inspired to possibly get a trailer someday–or even a vintage 14ft tow-behind camper, to make a weekend out of it. I would love to take the kitties (on harnesses of course). Perhaps go to out-of-town shows.

Who knows what this show will lead to. I’m hopeful. 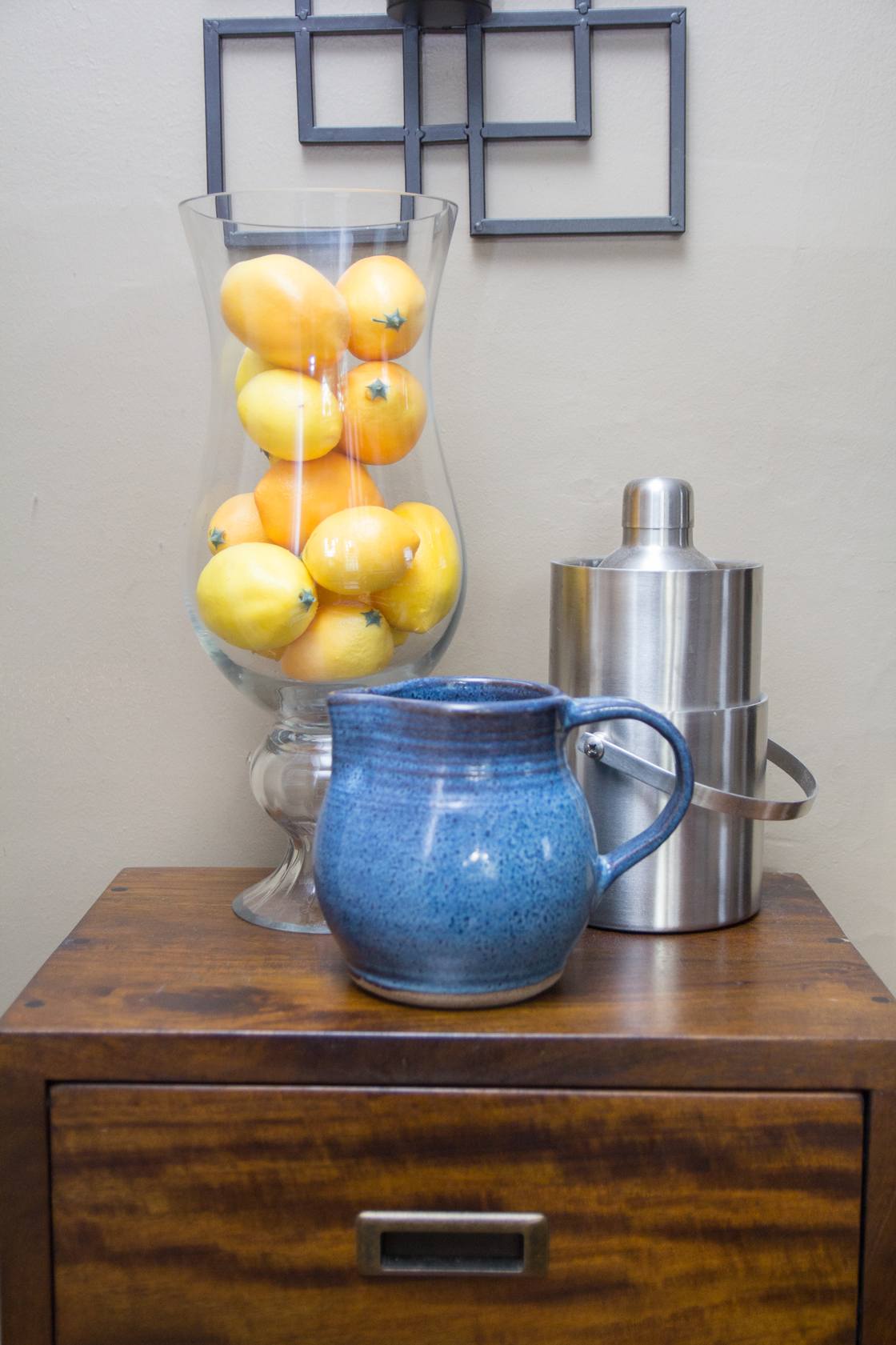 for that perfect gift

FINALLY, THE PLATES TO MATCH!
Mix, match and enjoy all of your favorite pieces Bungalow Potter pieces together with dinnerware sets to match.